These pictures were not necessarily assembled in the same order they were taken, and many of them switch off and on between the Doku RPG texture pack and the normal Minecraft skin thanks to patch that was installed halfway through my documentation. 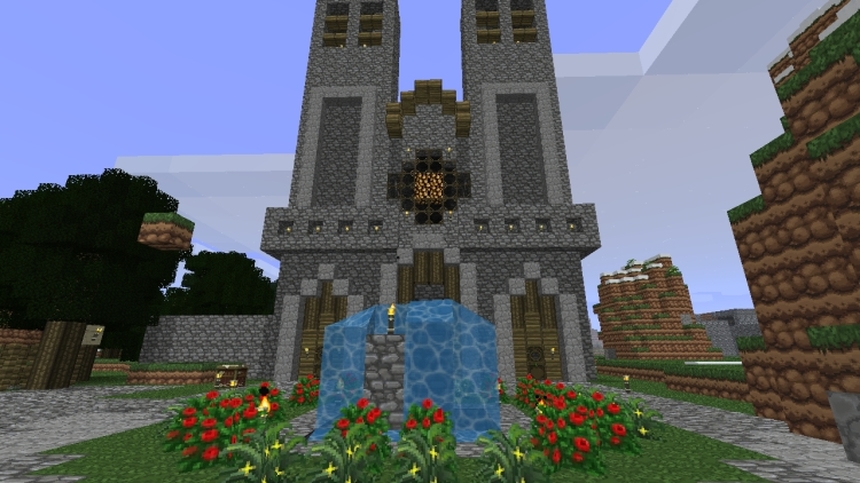 The facade finished up nicely, and I added a little garden in front with a fountain.  You can see the bell towers in their completed form here, too (please excuse my clipping). 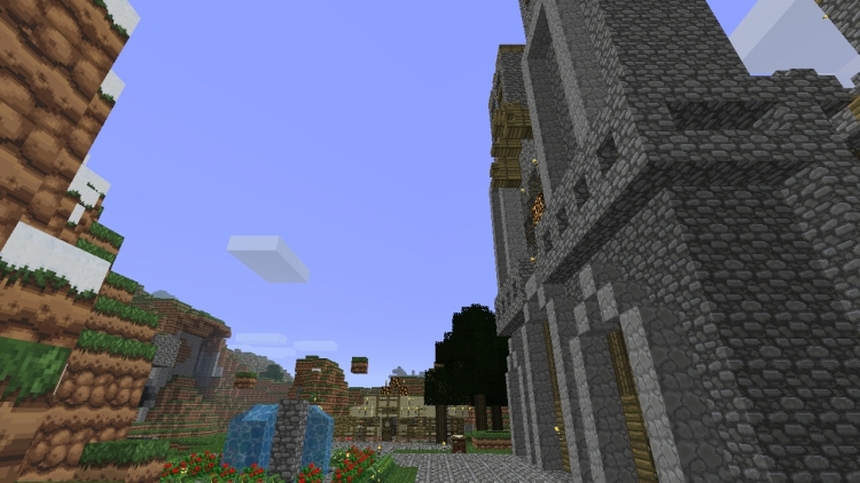 Facade from the side.  You can a subway station that a buddy of mine built in the background.  That particular stop on the subway line is appropriately called "Cathedral Station." 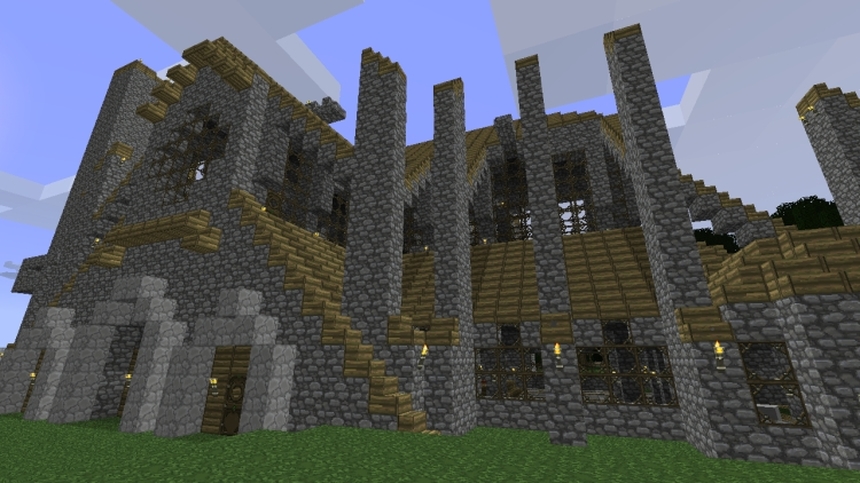 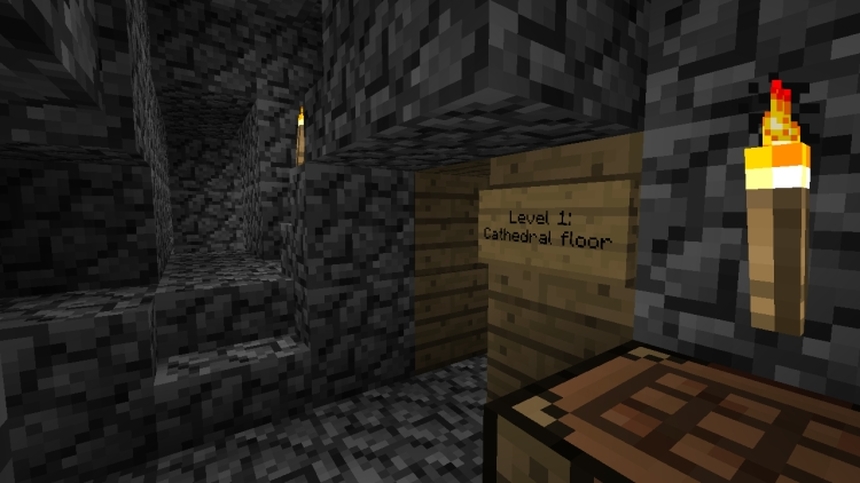 This was taken just inside the church's front left entrance.  The stairs go up to the other various levels of the cathedral and the bell towers, but we won't explore those until slightly later in the tour. 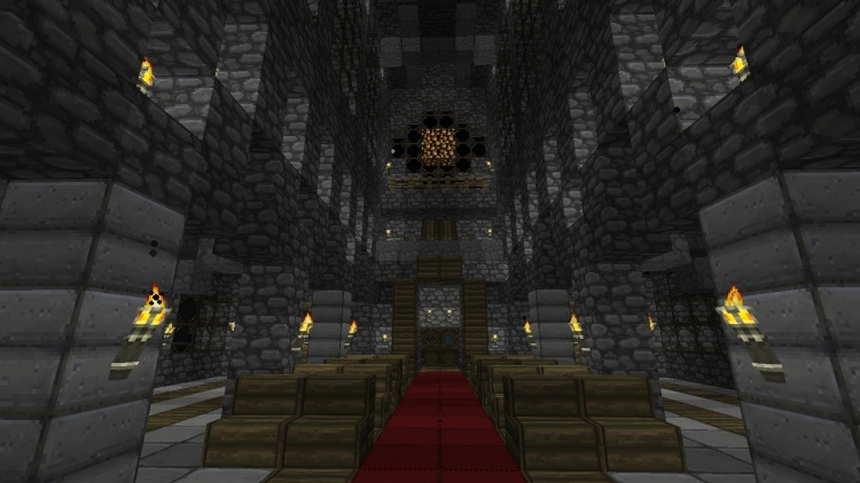 Ground level, just inside looking up at the rose window.  I added pews! 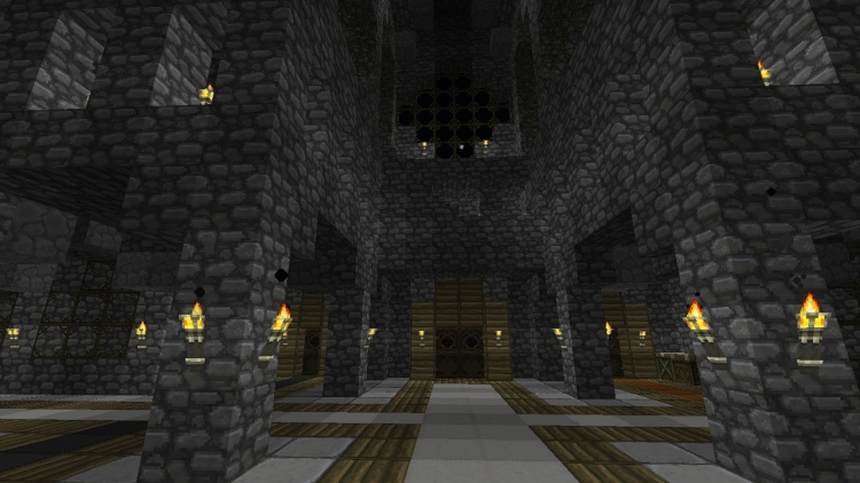 The cathedral's north entrance, viewed from the inside while standing in the crossing.  It's tough to see in the picture, but there's a staircase at the triforium level that we will visit later. 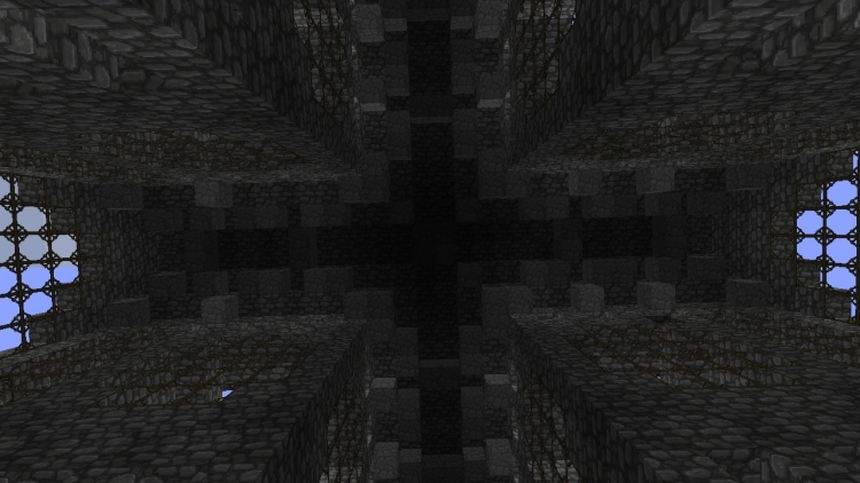 The view straight up at the ceiling while standing in the crossing.  Making that vault was tedious! 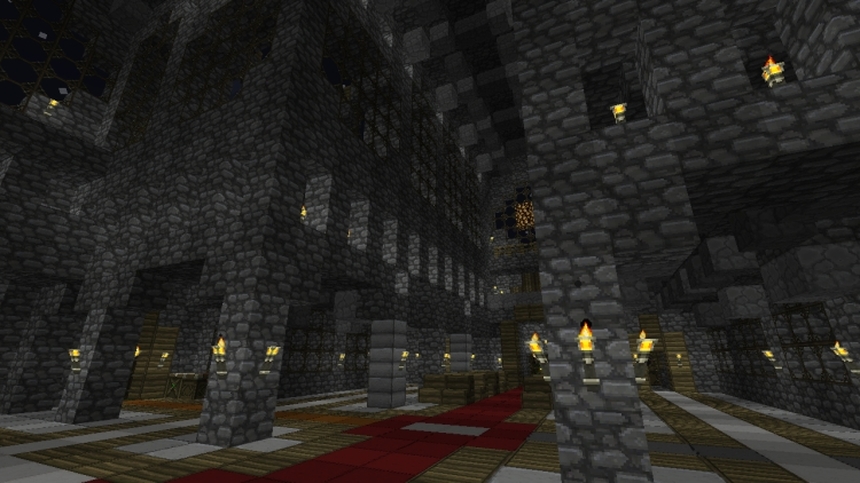 Standing in the crossing looking toward the choir/apse. 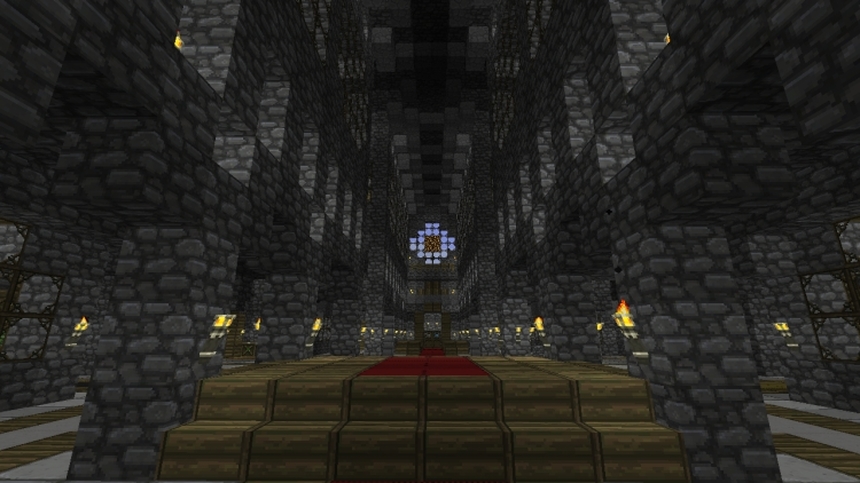 Standing in the apse looking east. 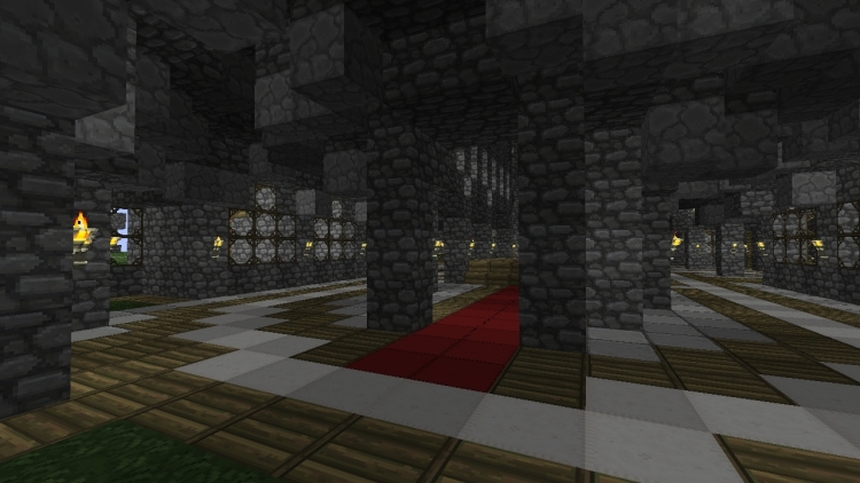 I took this snapshot of the ambulatory while standing in the largest of the five radiating chapels.  The floors of the chapels, for the most part, are still grass even as I type this. 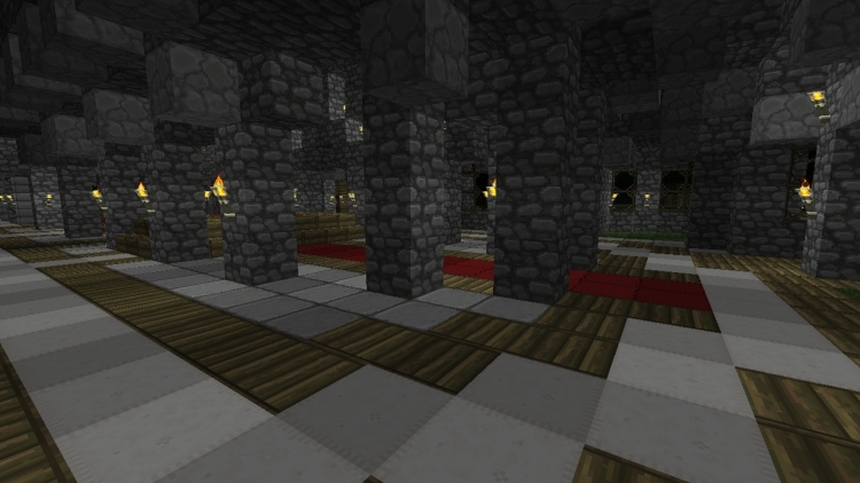 Another elegant view of the ambulatory/aisle. 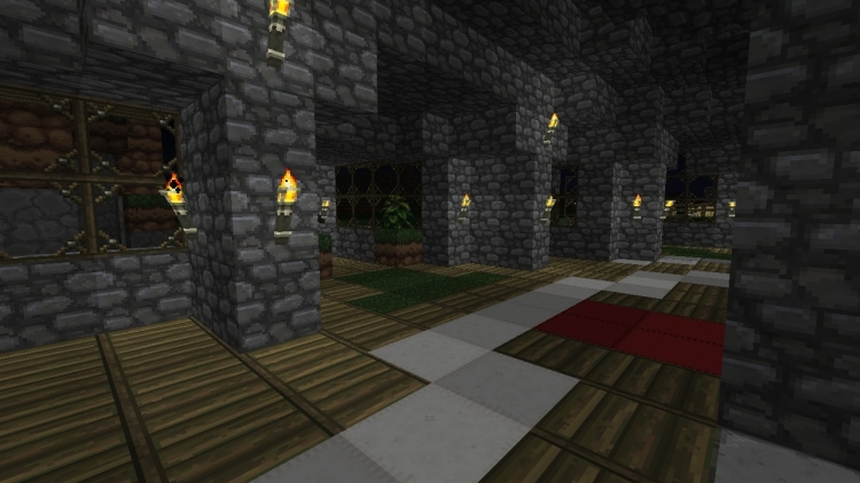 Here's the opposite view, showing the chapels. 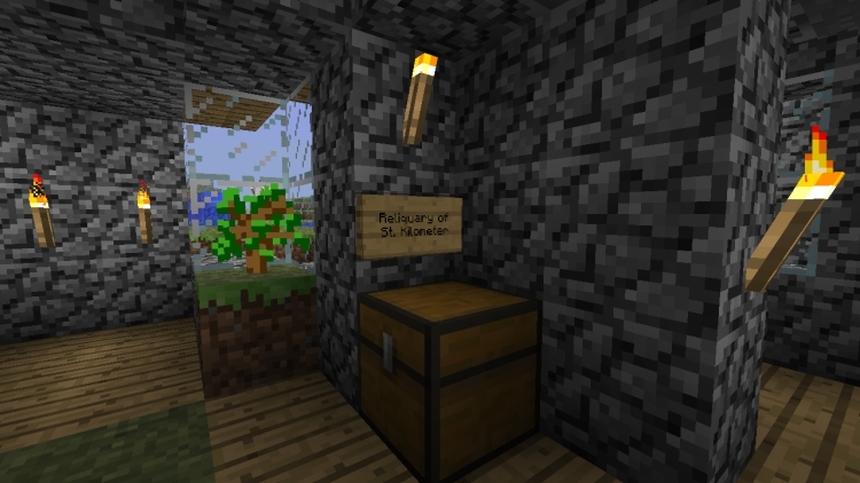 No cathedral is complete without a reliquary!  Reliquaries hold relics, which are typically bones or personal items that belonged to a church's patron saint.  Mine is not particularly fancy, but... 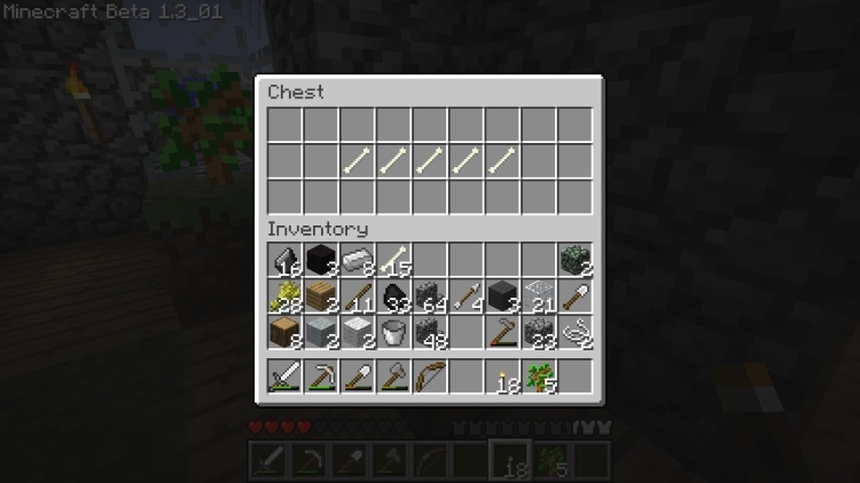 ...It just so happens that I have five of St. Kilometer's fingers inside. 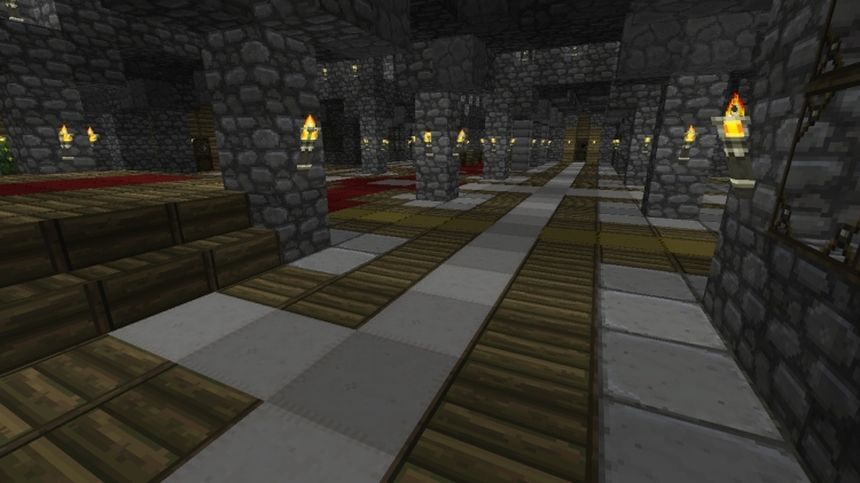 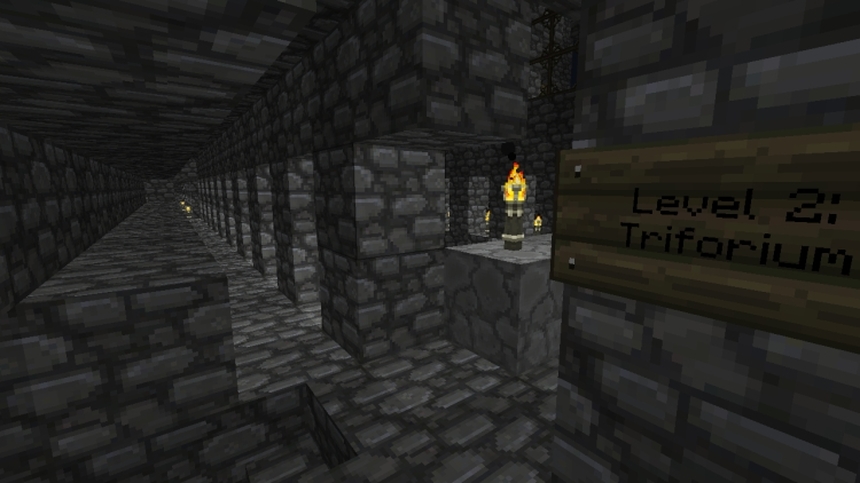 The second level of the church is the triforium which goes all the way around the inside of St. Kilometer.  In real cathedrals, this part of the church was used mostly for maintenance, but was also occasionally used as a viewing area during important religious ceremonies (citation needed). 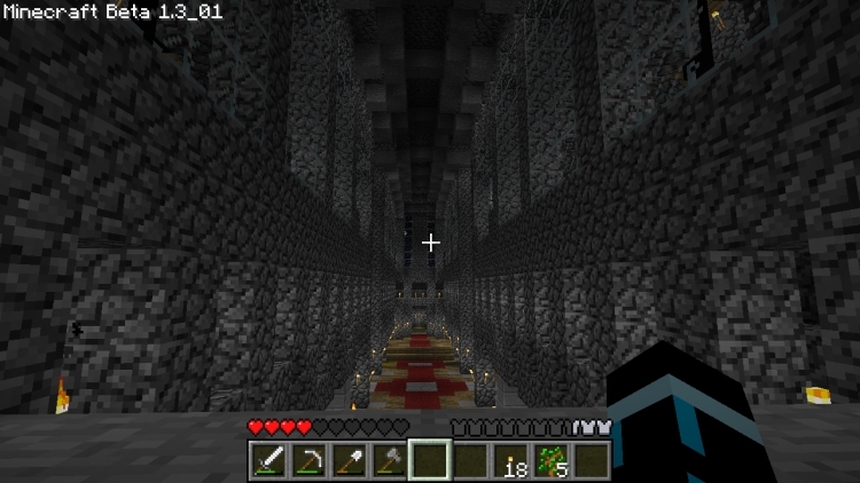 Just below the rose window at triforium level looking west. 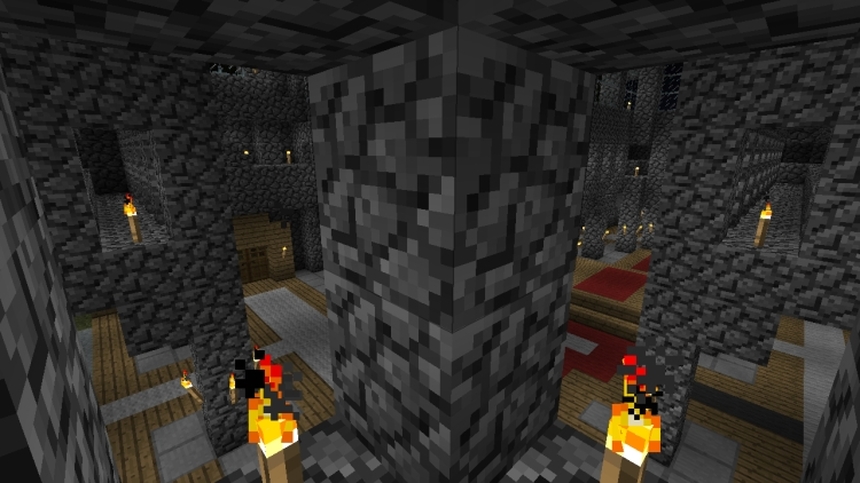 This was taken in the northeastern part of the triforium near the crossing.  From here, you can get a pretty good idea of just how the triforium allows one to circumnavigate the building at this level. 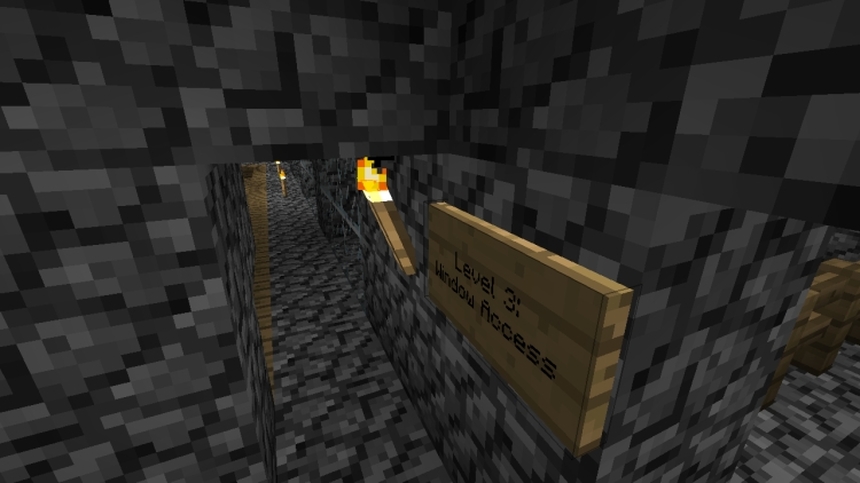 You can also walk all around the building at the clerestory window level, which is up another flight of stairs from the triforium. 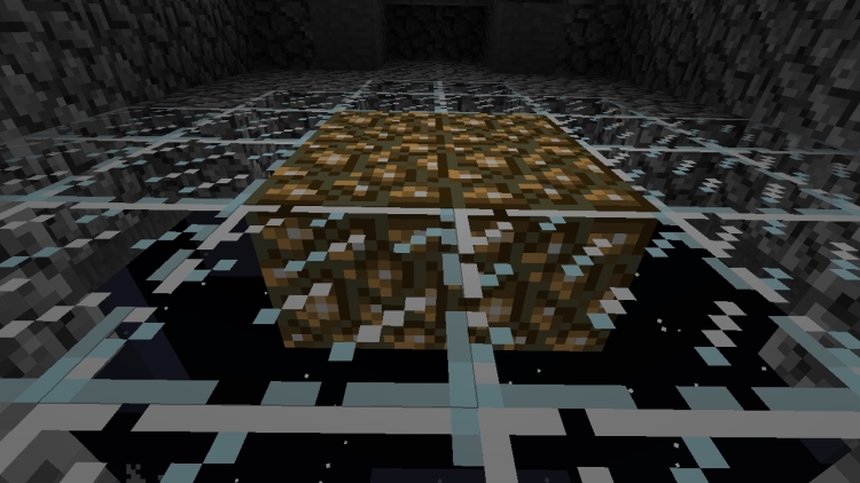 This level also allows easy access to the rose window from the inside, as you can see. 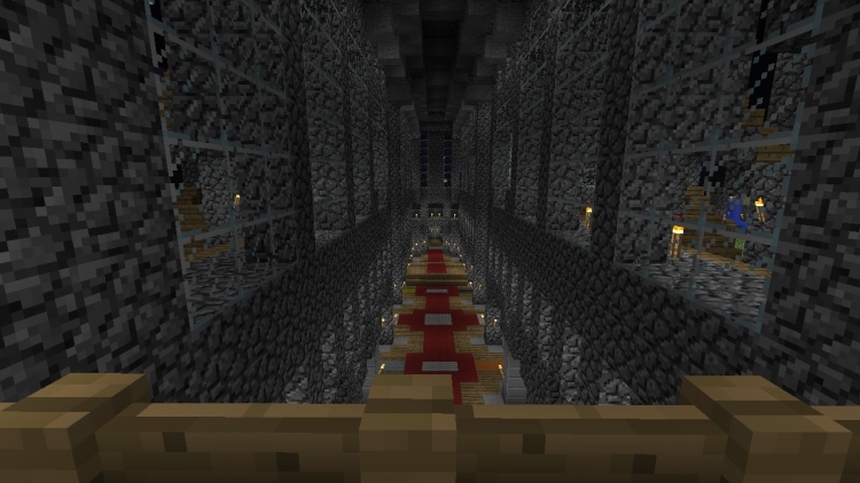 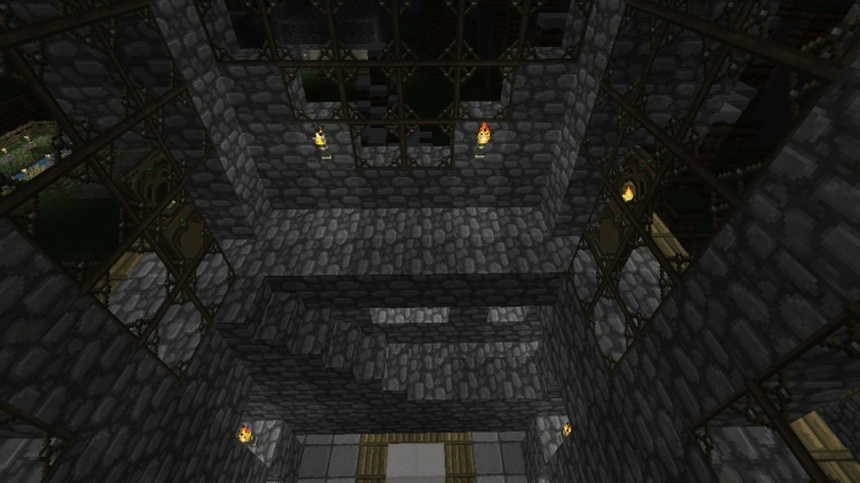 On the north and south ends of the building, the clerestory path ducks back inside.  It is here that you can find staircases that connect the clerestory and the triforium in St. Kilometer, which is something I mentioned briefly earlier.  This was a detail that I added purely for my own ease of access, and typically would not be seen like this in real buildings. 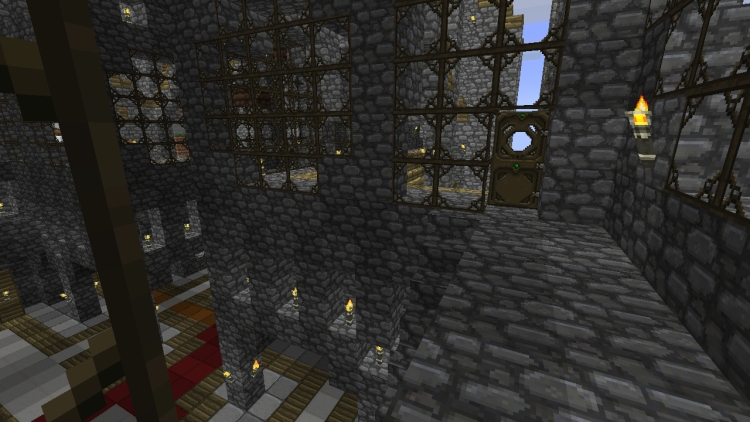 This is the view once you ascend from the triforium to the clerestory from the afore-mentioned staircase. 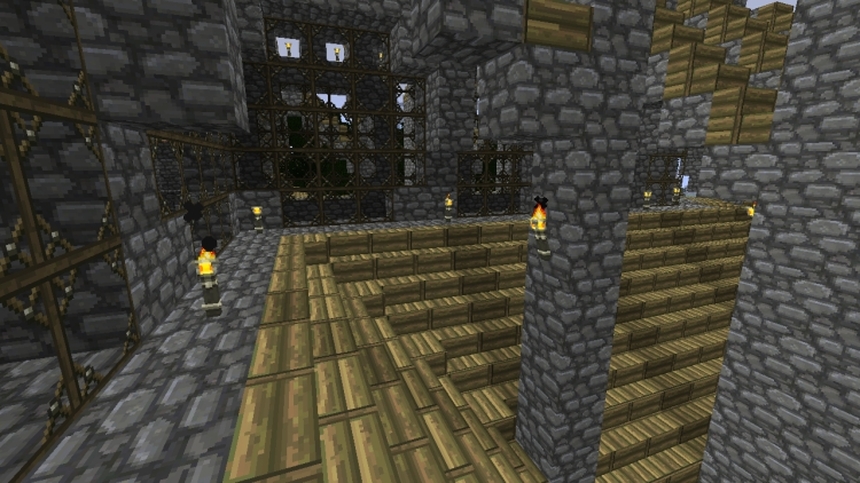 I have included this picture once before, but this is what the aisle roof looks like just outside the doorway in the picture right before this one.  As you can see, most of the clerestory path is actually open-air. 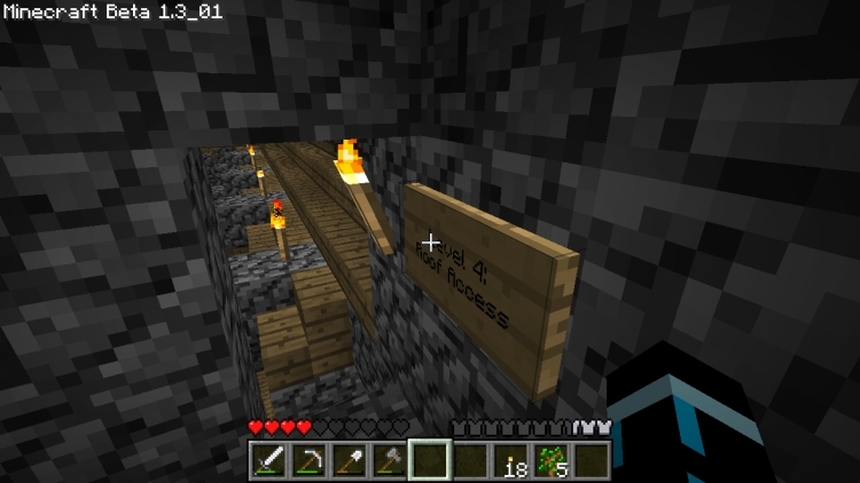 The next level of the cathedral allows access to the roof. 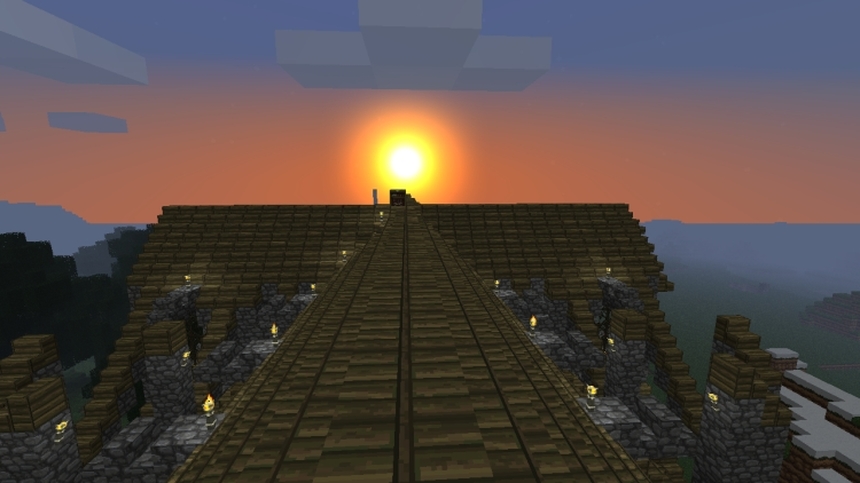 The roof of the cathedral during a sunset.  There's a crafting table still hanging around up here from when I had to assemble all of those wooden stairs!  Each one of the torches immediately to the right and left of the roof eaves rests upon a "gargoyle."
A close-up of the gargoyles, with an artist's interpretation on the right.  in real churches, gargoyles are/were installed to redirect water from the roof.  Ferocious looking statues on churches that are not intended to redirect water are technically called "grotesques." 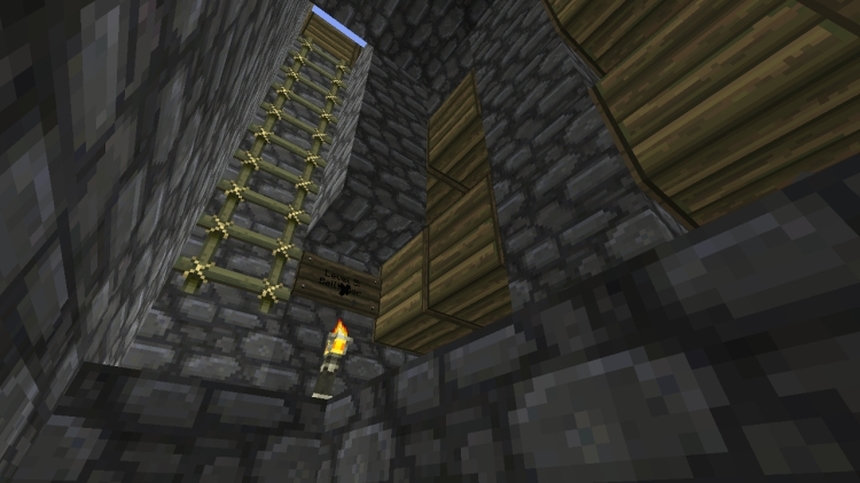 After spiraling up many more stairs, one finally reaches the bell tower.  At the moment, there are no bells... but someday I may strategically place note blocks somewhere in the vicinity when I have time.  I should note at this point that the bell towers and staircases on both the north and south sides of the cathedral are mirror images of each other.  During this tour we have only been viewing access points from the south tower, but the north tower is identical. 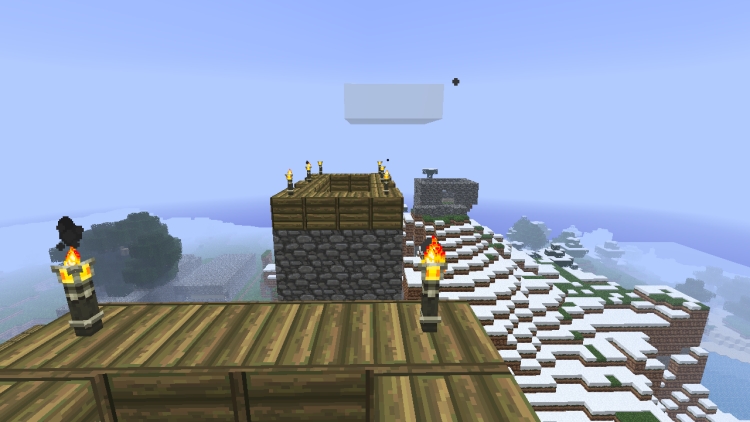 This is the view from the top, looking over from the south tower to the north one. 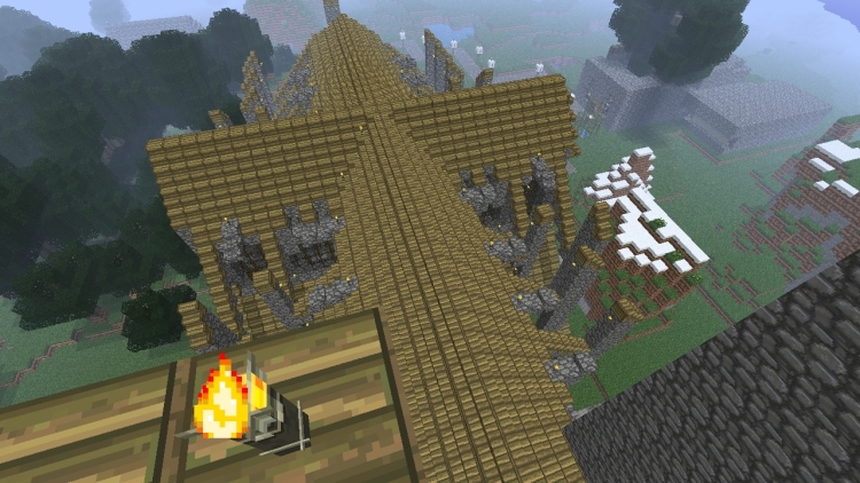 One final view from the top looking down at my handiwork. 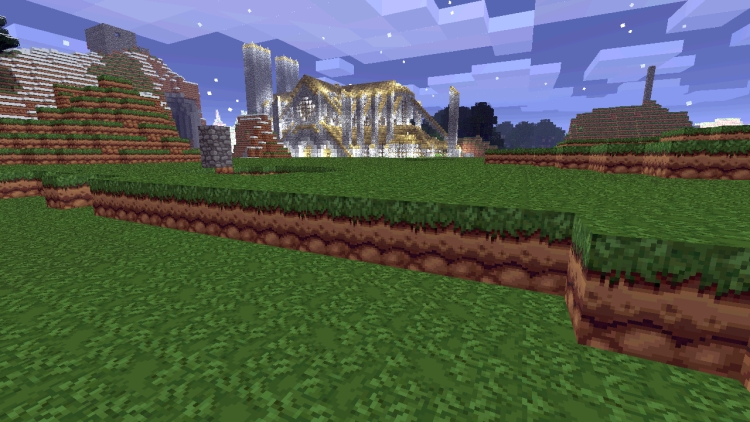 I hope you enjoyed my tour of St. Kilometer!  Please return again soon, as I'm sure my adventures in building are far from over.